By common law, it is a fact that the United States’ #1 hobby involves hunting. All forms of hunting involve a firearm, as guaranteed by the 2nd Amendment of the United States of America’s constitution. If the 2nd Amendment wasn’t important, it wouldn’t be #2. But America is facing a tragedy once again, as gun sales have declined over the past six months because of mainstream media liberal outrage. The liberals claim to support the 2nd Amendment, but demand “universal background checks”, a dog-whistle word for socialism. This is a national outrage that demands more media recognition, but of course, you won’t find any coverage of this issue except on Bullshit News. Let’s dive deep into it:

As discussed before on this website, teachers are not properly armed to defend themselves in case ISIS busts open their English class door and force children to start speaking in Islam. We refuse to teach children about firearm safety and protocol to defend themselves from communist ISIS intrusion. If America’s children can’t learn to defend themselves from birth to death, how can they guarantee their own safety? Parents can only do so much by purchasing firearms for every member of their family, including pets, but they can’t do everything. That’s why teachers ought to teach children on the use of firearms starting around pre-kindergarten, or kindergarten for the more “slower” kids. As every kid learns from the James Bond movies, the only way to stop an alleged “bad person with a gun” is a good person with a gun, which happens to be almost every American who has a gun.

We reached out to the NRA for a quote, but they did not respond for comment: 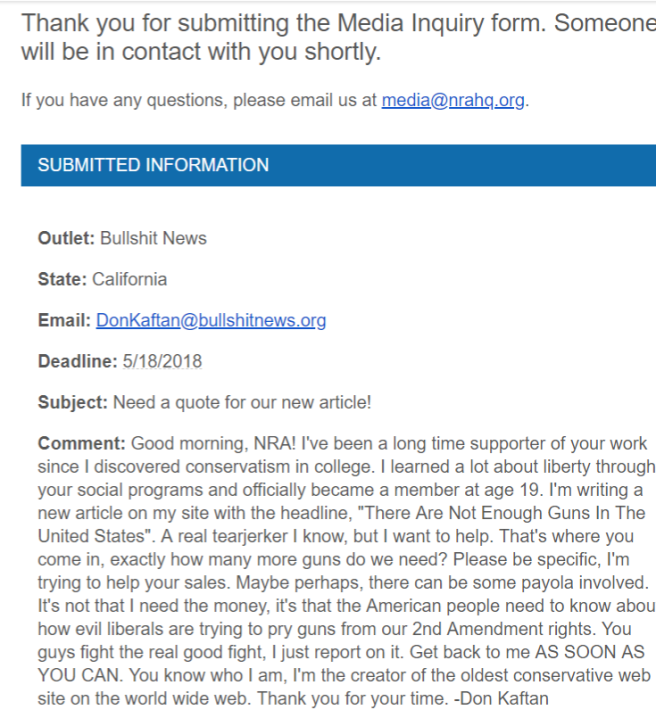 Clearly, the NRA is working very hard to keep fighting the good fight. But perhaps the NRA doesn’t want to confront the fact that gun sales are declining, but rather trying to reinvent guns and appeal them to a younger or different demographic. The secretive nature of the NRA makes many liberals upset because they cannot process logic, unlike a noble conservative institution like Bullshit News or The Rush Limbaugh Show. As an experienced doctor and lawyer, I am an expert in critical thought, and it should be obvious the NRA is in deep thought over this sensitive issue of gun sales. My best thoughts and prayers are with the NRA in this tragic time. They should have an answer to the nation soon enough.

I looked for answers outside of the NRA, but college libraries in my nearby vicinity have barred me because of my “white privilege”. I do not understand how other common everyday Americans are not outraged by the fact they are not armed to defend themselves or concerned about the decline in gun sales. Instead, they talked about Santa Fe, New Mexico for some reason, which I refuse to believe is a U.S territory or state. These “people” are clearly part of the problem, and they can solve this problem by adequately defending themselves with a handgun. Remember, there may be bad people with guns (and their intentions are probably not related to the gun), but with enough good people with guns can outmatch and outduel all the alleged “bad people with guns”. There are no bad people with guns, only criminals. And criminals are not people, as President Trump uttered yesterday. So who are the bad people with guns? An urban fiction.

“Universal Background Checks” are precisely what the Stasi used to reclaim Germany as a communist state. But eventually, they failed, just as Democrats ordinarily do. The UBC’s are a threat to our national epidemic on the lack of guns per American citizen, and if the liberals keep complaining their way, it’s possible for these so-called “Universal Background Checks” to become more recognized as a form of gun censorship. These acts are not just against nature, but the First and Second Amendment of our God-fearing country. These are acts of malice waiting to happen, and we don’t have the research to know whether or not UBC’s will lead to fewer guns in our society. But the fewer people have access to guns, the more dangerous people become. You cannot deprive people of their basic human liberty to defend themselves. But because liberals are not people, they do not have the emotions to empathize with a passionate American who loves the Second Amendment just as liberals love running the government to the ground with budget deficits and needless taxing.

As we approach a national epidemic of a possible decline in gun sales, let us purchase as many firearms as we are able to for this and next week so we can do our best to make our country better prepared for terrorist acts of Godless Islamic Communism. Our founding fathers did not invent a constitution to submit themselves to the United Kingdom and their monarchic oppression. It has long been a national pastime to own a gun, and we can’t let liberals take what most Americans love. If we let liberals get away with “Universal Background Checks”, they will start to pry away at other freedoms until America becomes a communist nation, precisely what Barack Hussein Obama wanted to leave as his legacy.

Dr. Steven T. Clements, Esquire is Bullshit News’s legal scholar and property management expert witness for a side-gig. He spent a long time in college and law school to be properly educated about serious subjects like tax codes and property law related subjects like privacy. After law school, he decided he wanted to learn more about life and became a doctor. He is a lifelong member of the Federalist Society and the National Rifle Association.